Each year the Firefighters Burn Fund sets aside funds for up to six $1000 bursaries.

Applicants are young adult burn survivors who were patients in the Children’s Hospital Burn Unit who are now going on to post-secondary education / trade school.

Photo below of bursary recipient Dawson Blahey, with Martin Johnson presenting a cheque for $1000 to further his education.  He will be attending the University of Manitoba, enrolled in the Agriculture program. 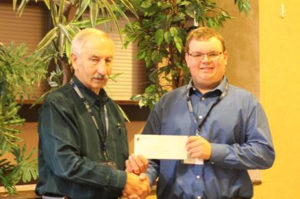 Good morning fellow burn survivors, families, friends and professionals. My name is Dawson Blahey. I am from a small community about an hour north of Winnipeg called Arborg. I live with my Dad, stepmother and sister on a farm about 13 miles southwest of town. There we run a beef cattle operation with my Grandpa and Uncle. In June I graduated from Arborg Collegiate and currently enrolled at the University of Manitoba. When Sara Jane called to ask me if I would like to speak at the conference this year I was nervous however I did not hesitate to tell her yes. I want to tell my story as a Burn Survivor.

I was burned shortly before my fourth birthday. My sister and I were spending the evening with our Dad and we wanted to have a wiener roast in our backyard. Dad was in charge of the fire while my sister and I looked for chairs, wiener sticks, etc. The fire did not want to ignite so Dad went for some camp fire fuel to get it started. He told me later when I was old enough to understand that it was very humid that evening. When he added the camp fire fuel Dad said the fire blew up like there was nothing stopping it. My sister Brooke and I were sitting on chairs several feet away. Once Dad realized what happened he raced over to me and rolled me on the ground and tried to take my clothes off. Unfortunately the type of clothing I was wearing was nylon which more or less melted to my skin. I had third degree burns to my face, chest, legs and feet. My Dad had burns on his hands and legs. My sister on the top of her head. Dad rushed us to the local hospital which where they inserted a tube in my airway and then rushed me by ambulance to Health Sciences Centre. I underwent numerous surgeries of skin grafting to help repair the burns. I was in an induced coma for a number of days while my burns started the healing process. I remember the many long hours in the hospital. Either sitting in my room watching TV or playing in the playroom. I was is the hospital for almost two months. I was thankful for all the visitors that came to see me and support my family.

At the time of my accident our community came together to support me and my family. There was a community BBQ held at the local Coop store. The Fraserwood Fire Department gave a donation to our family as well as many private donations were given.

While there I was fitted with the garments to help with healing process. Mine were made to look like Spider Man which was my favorite character at the time. I remember they made me hot and itchy and I did not like to wear them. After that I had to go in for checkups and get new garments fitted as I grew. I still have those garments. I want to show my kids someday. I plan on going back someday to the Burn Unit at HSC to see what has changed. I want to see how technology and research have improved burn recovery.

Once I came home it was back to usual. My sister and I were living with our Mom at the time. While our parents worked we attended daycare. I remember having to wear my garments all the time. My daycare teacher Suava helped me with them all the time. She was really nice. Daycare is also where I met a lot of my close friends that I have today. Of the 21 people I recently graduated high school with, 15 of them I have known since daycare and kindergarten. We have always been a close bunch. I feel this has helped me with feeling accepted where ever I go as there never was any bullying issues. Or if there was, my friends were there to stop it. I know people would look at me and stare. Wondering what was wrong with my face. It made me uncomfortable however I would appreciate when someone would just ask instead of staring. There were times my friends would just step in and say. It was no big deal to them. People have asked me over the years about skin grafting. I did have some at the start however as I got older the doctors left that decision to me and my parents. I like my scars! They are like tattoos and they are part of who I am! In September 2005 I started kindergarten. It was nice to be there with my friends however I sure didn’t like the work. If you asked my Dad and stepmom I grumbled about going to school for the next thirteen years. So when I said I wanted to go to University they were very surprised! As I grew up I was involved in many activities in school and out. In early/middle years I was involved in all school sports. I volunteered to help out with events in school and was a member of the student council. Out of school I played soccer, learned to skate and curl and took swimming lessons. I found out that I love to curl. I curled during school and have had a team in the men’s league for the last few years. We also participated in local bonspiels. When I hit high school, I continued to be involved in school sports and activities. I also became a member of the Arborg Antique Tractor Club and volunteered at and participated in the local tractor pulls since I was 13 years old. The antique tractors are ones that were made before 1960. I have three of my own. My Dad and sister are also involved and my step mom volunteers. As you can see I was never held back from participating in whatever I wanted. I had so much support from my parents and family. I was never discouraged. I was always told that there was no reason that you cannot do it. As I had stated earlier my Dad farms with my Grandpa and Uncle. I came to live with Dad when I was four and a half. We live just down the road from Grandpa and Baba and Uncle Mike so not a day went by that I did not see them. I was always out on the farm for as long as I can remember. From an early age I was helping on the farm. My sister and I would follow Dad, Grandpa and my Uncle where ever we could. I was never discouraged from learning and doing everything I could on the farm. I have always been very involved in the day to day operation of the farm. I have my own small herd of cattle. Currently I am enrolled in the Diploma in Agriculture course offered at the University of Manitoba. This is a two year program with an option to continue into the degree program. I am very interested in Agribusiness. At this time I am unsure if I will return to the family farm when I complete my post-secondary education or find an off farm job or do both like my Dad does. I love the farm life. As a burn survivor, I had many opportunities that other kids didn’t have. I attended Burn Camp sponsored by the Manitoba Fire Fighters Burn Fund starting when I was 6 years old. The first couple of years it was held at Camp Arnes. Arborg is located near Arnes so I would go just during the day. However when I was 8, camp was moved to Kenora. It was held there for a few years and then moved to southeastern Manitoba near Moose Lake until present. It was so much fun. There never was a time that I didn’t want to go. It just felt right. I looked forward to seeing everyone. I met other burn survivors, volunteers and professionals from Manitoba, Northern Ontario and Nunavut. There was always lots to do. I looked forward to the sharing circle where we were able to talk about our challenges. I always felt lucky as there were a number of the campers that had had to deal with a number of bullying issues. And I always looked forward to seeing the kids from Nunavut and hearing about the way of life up there. At the end of camp we were always given a DVD with the pictures from the year before. It was always exciting to look back at those pictures and show to family and friends.

Another opportunity I had was to be part of the “Dreams Take Flight.” This is a non-profit organization that works together with Air Canada to provide a ‘trip of a lifetime’ to children that are physically, mentally or socially challenged. I was ten years old when I went to Disney World in Orlando, Florida. This is somewhere we would never have gone as a family. We left very early in the morning and one of the highlights was to look out the window on one side of the plane and see the sun rise and darkness on the other side. As well as the big pillow fight that was had by all. Other highlights were the rides and all the characters.

In 2015 I was chosen to represent Manitoba at the International Burn Conference. This was held in Washington, DC and Edgewater, Maryland. Fire Fighter Steve Judge attended the conference with me. While there we met other burn survivors and volunteers from across Canada and the United States. Some of the highlights of our trip were visiting the Washington monument, Smithsonian Institute, a Naval Academy tour, Arlington National Cemetery and attending a Baltimore Orioles game. We also went to Mount Vernon where I was chosen to lay a wreath by George Washington’s grave. We also played lots of games and enjoyed many barbeques. Our trip was cut a day short as it was well into hurricane season. They were worried about the hurricane in progress at the time making landfall. It was pretty cool.

This summer I was also a recipient of a Thomas W. Hart Memorial scholarship for post-secondary education. As I get older and realize what I went through I find I am more open to talking to people about it. Now that I have graduated from high school and have moved to Winnipeg to go to university I realize how lucky I am. I have had so much positive support from my family, friends, and community. My message here today is do not let other people judge you by the way you look, live your life to the fullest and make the best of every opportunity.

Thank you for listening to my story.